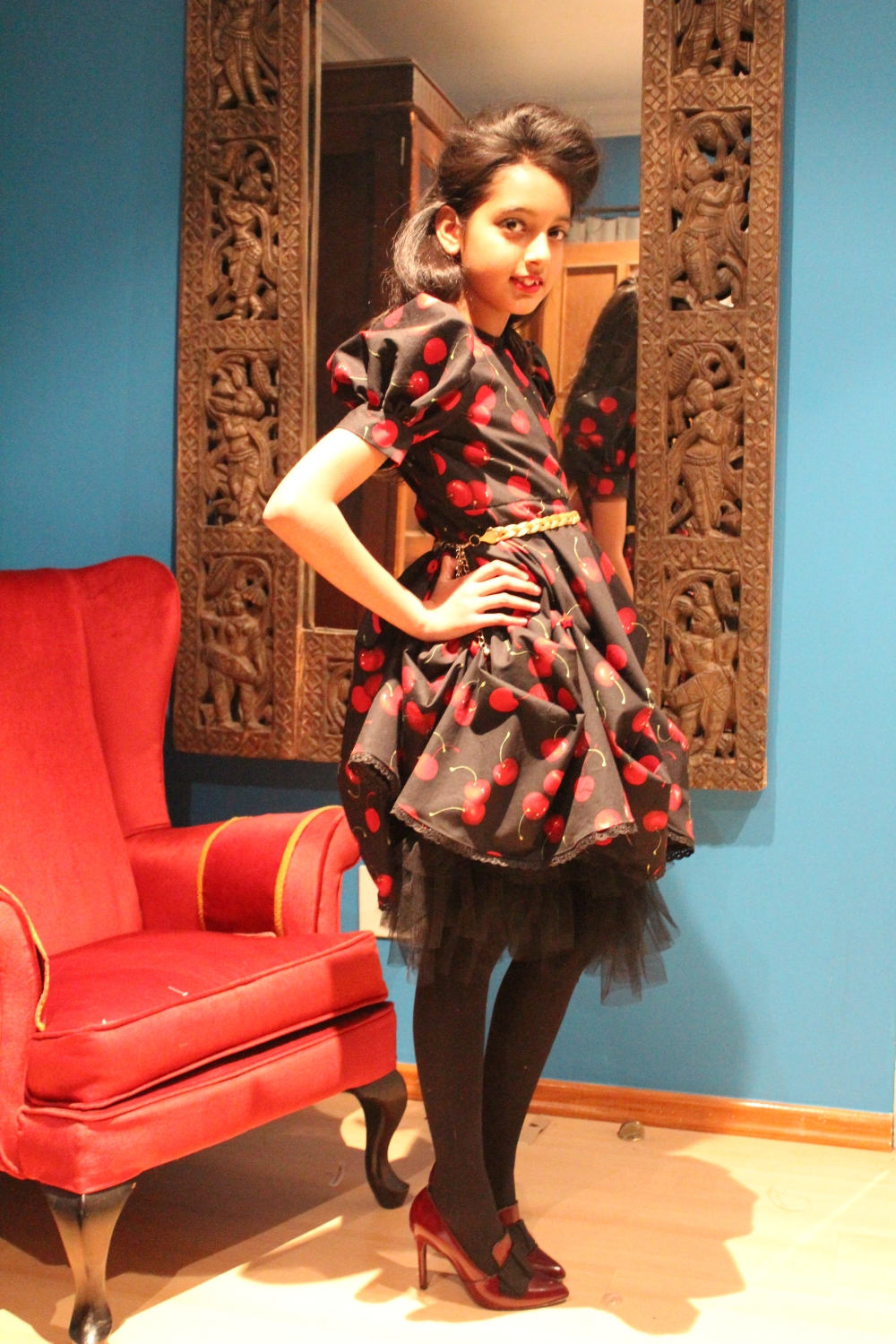 Tanvi, my 11-year-old daughter, is the best assistant I could ask for! She packs up my paperwork at the end of the day, makes roti, frosts cakes. She even works the credit card machine when Holi Cow is busy and can work the La Sam Marco coffee machine…not perfectly, but nearly!

Most of my friends and colleagues have met little Tanvi – she is a pleasure and when I am just in need of a few extra nimble fingers, she is only too pleased to help out. We spend lots of time together, and when we are not working, we are most likely at Hyde Park shopping centre or maybe Sandton City…fashion watching! We both love clothing….and often talk about what we like/don’t like about designs. Tanvi often accompanies me to wardrobe fittings with Vanya and Thando Mangaliso at Sun Goddess, or obsesses over the dresses from Arwen Swan! It was only quite recently that I realized that I created a fashion monster!

Tanvi was invited to her first ever grade 6 Spring Dance (a little early, in my opinion) and she, had her very own idea of what she wanted to wear! The first step was to google the weather report….I confess, I google almost everything! Cold fronts, prediction of snow and icy wind and Tanvi still insisted that she wanted me to make her a party dress! I just couldn’t refuse her request…I had to make the dress and it needed to be perfect, poofy and a tulle underskirt was not negotiable…I have Arwen Swan to thank for the high expectations!

It was going to be pretty challenging to do a frock for Spring when the weather had turned nasty but I was determined to give it a bash! I chose the fabric (couldn’t resist the cherries), sketched out a pattern (it took lots of time since I have never been to a sewing class), and proceeded to cut and tack the pieces in place. Hetal, my 14-year-old daughter, was intrigued by this design and hauled out the sewing machine only to find the presser foot missing! I was devastated and completely distraught! The search for the missing presser foot ended up as a Spring cleaning operation which left everyone feeling tired and rather frustrated!

Still, the presser foot was not to be found! After finally tracking down the Husqvarna dealer in Jozi, I was promised they would ring back….its over a week later….still nothing! I rushed off to Bernina at Cedar Square….I had the most amazing experience! Great staff and service and the new machine was delivered to me in a couple of hours! I opted for a pretty basic one but it works like a charm! 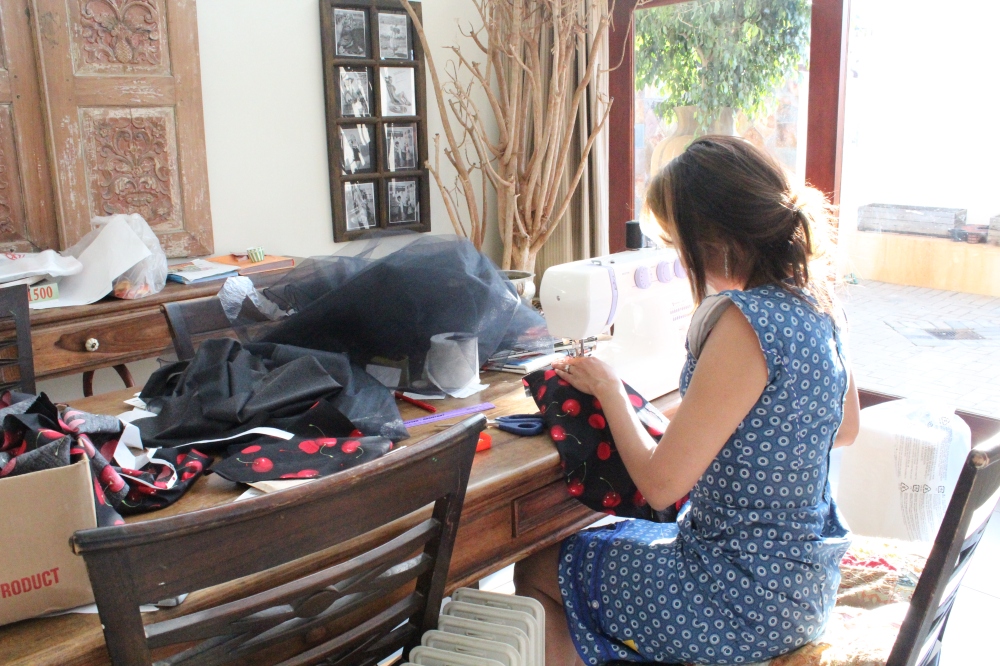 Yudhika Sujanani – Foot down on the new Bernina sewing machine 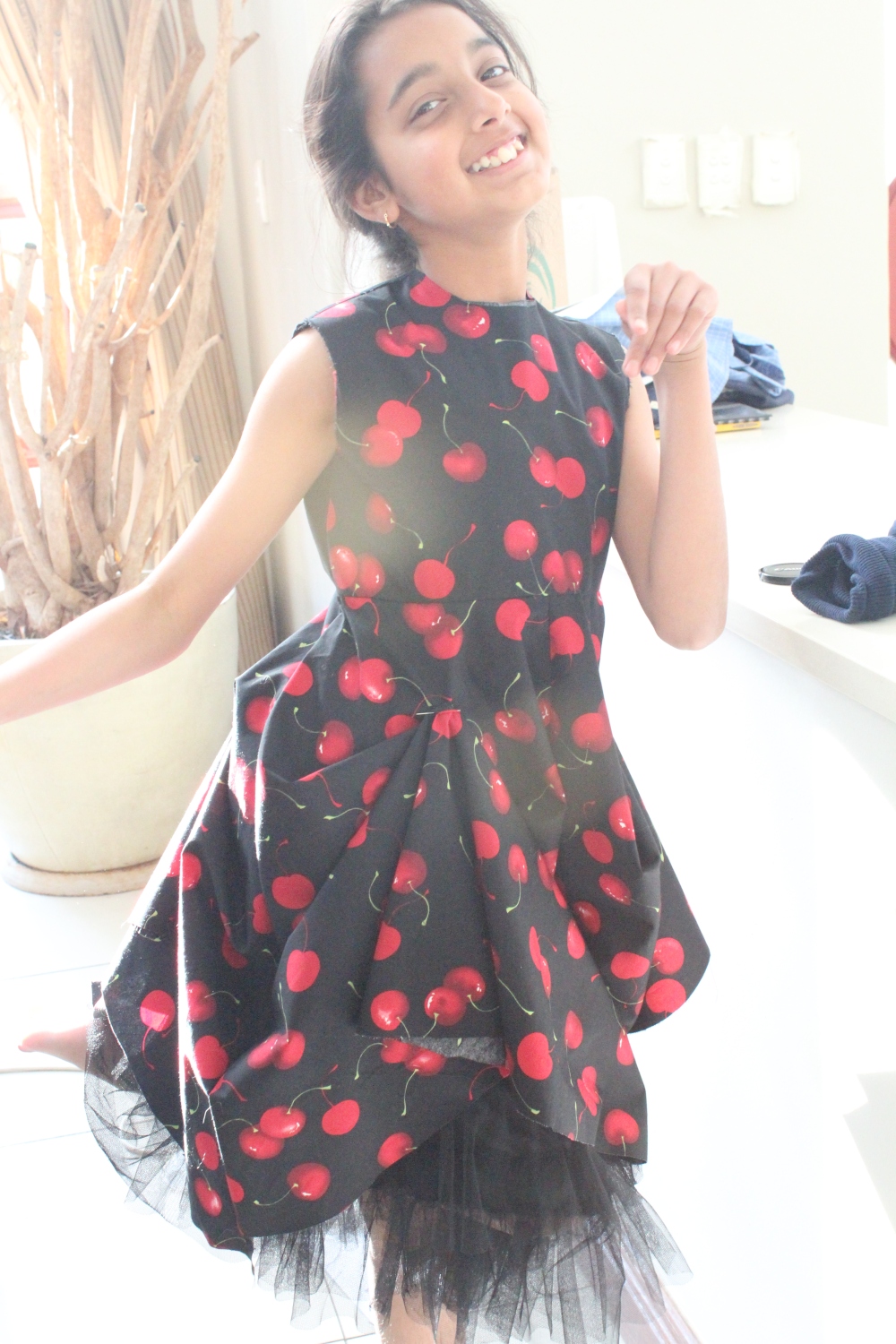 It was time to get stitching….and it was an incredibly fun experience for us girls! I had fashion tips and suggestions from both girls and I became the seamstress and designer while Tanvi and Hetal argued with me endlessly on the hemline! ‘Shorter Mom….Shorter!!!!’ I can see that the next few years are going to be pretty bleak….’Knees are not beautiful things’, I argued! Eventually, we just compromised! 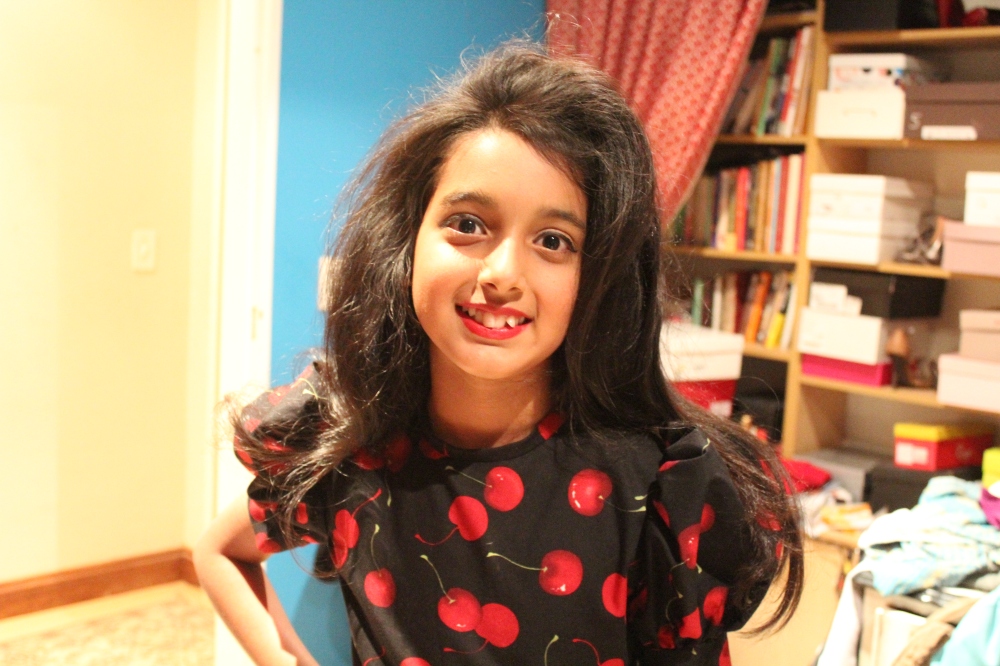 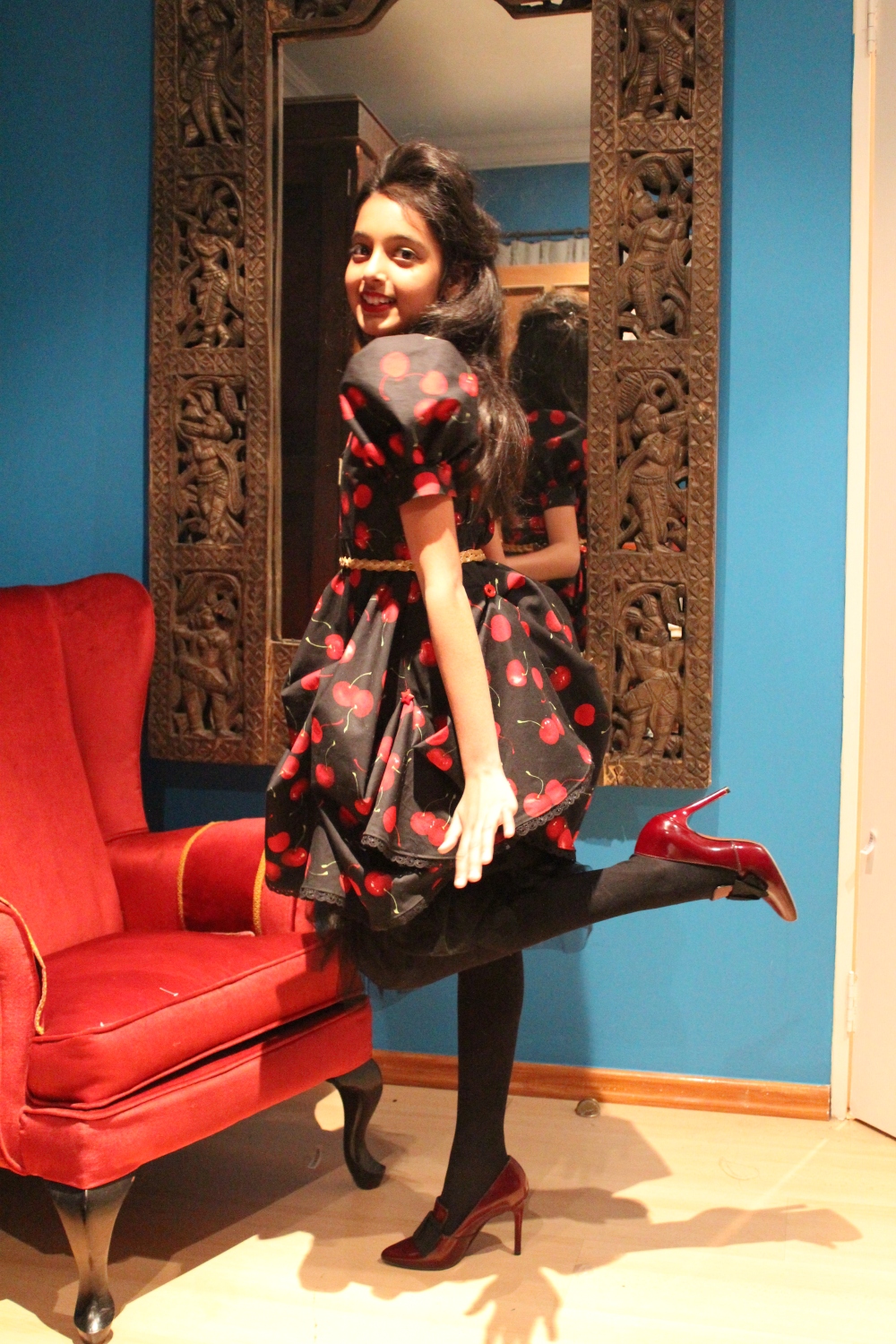 Tanvi looked like a princess in her dress! She insisted on wearing my Lanvin shoes…I was inconsolable…my little girl fitting into my shoes! I am just not emotionally ready to share my shoes or to let her grow up!

We dropped her at the dance, her little bag was searched at the entrance, and then she dashed off with her friends…I felt sad and suddenly lonely! And yes, I did get a few comments about buying a shotgun! No need for that…I, like most Indian mothers, am certain that I will be able to turn any household object into a weapon….just like my mom and grandmother did! A regular bedroom slipper was something to be feared and so was the wooden spoon or clothes hanger! 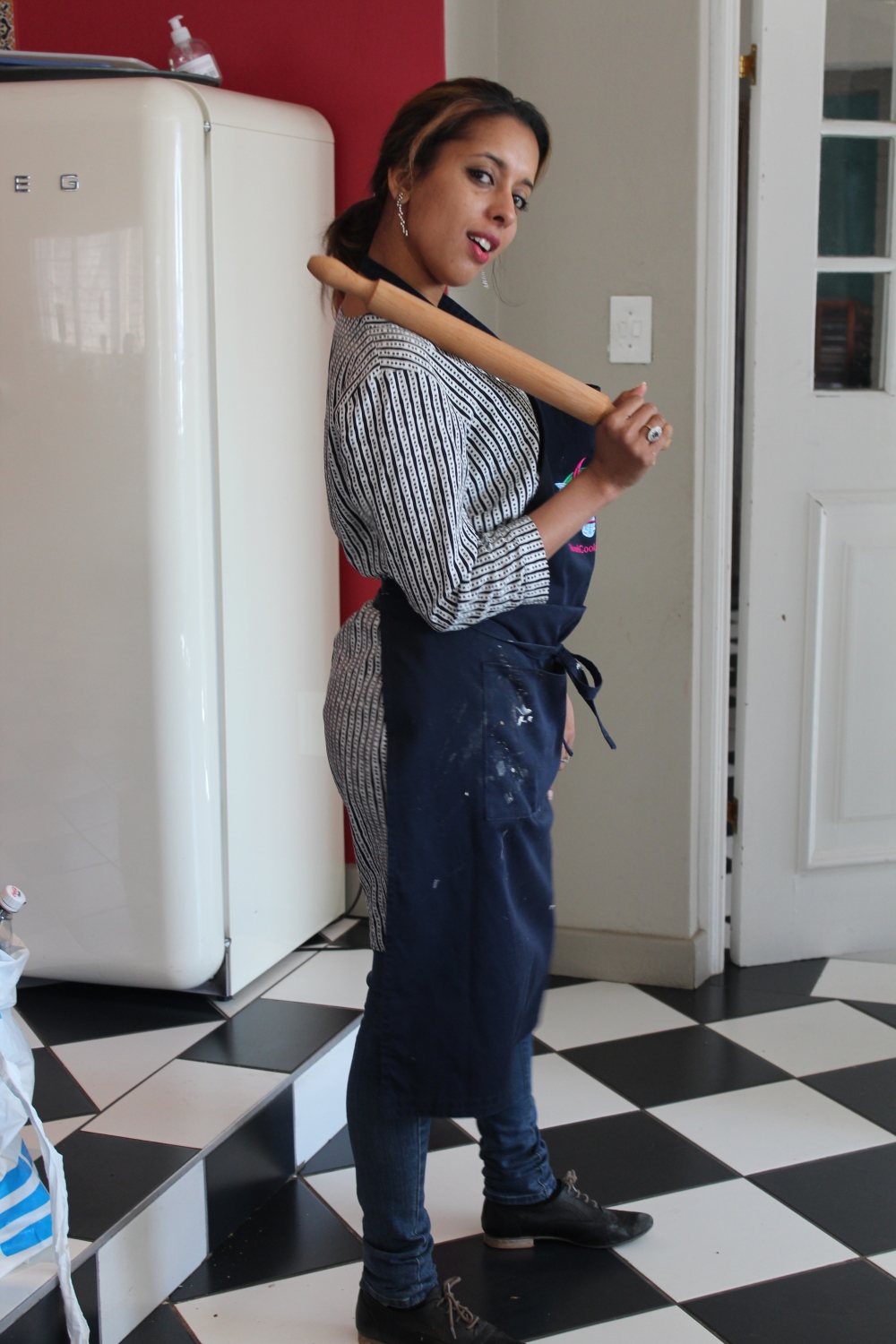 Here are the cupcakes we baked for Spring….creating more special memories with my family! Even after treating myself to a few of these delicious cakes, I am still not ready to share my shoe collection! 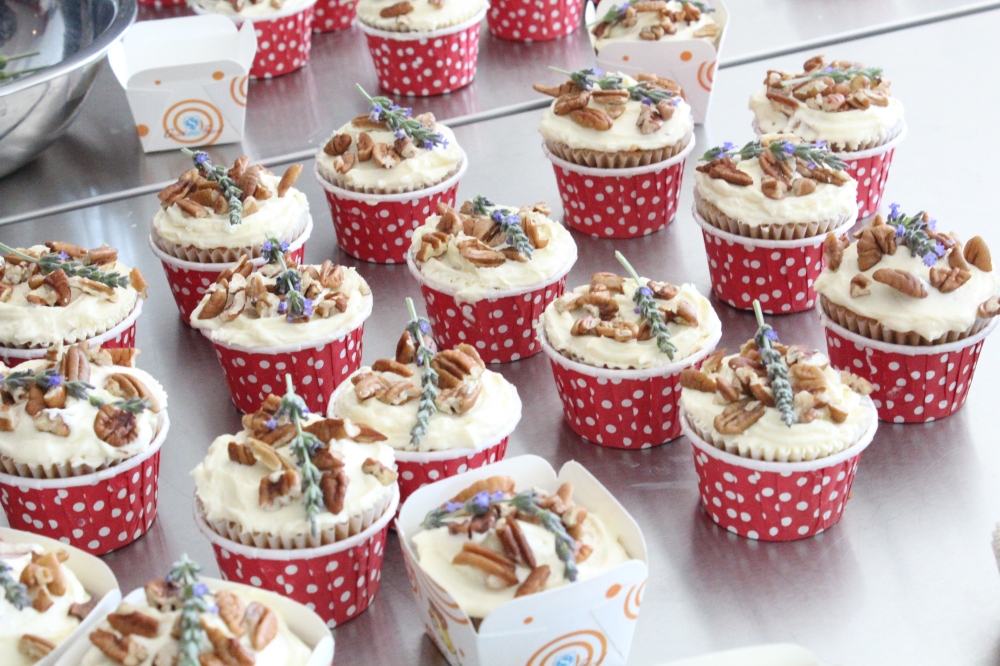 Beat eggs in a mixer until light and fluffly – they should triple in volume.
Add brown sugar gradually and continue beating until the sugar dissolves and the mixture leaves a trail on the surface.
Add the sunflower oil and vanilla essence, then beat until combined.
Sift the dry ingredients into the egg mixture and fold.
The mixture should be thick and free from lumps.
Add the grated carrots and stir well.
Scoop the mixture into paper cups.
Bake for 20 – 22 minutes – I use a skewer to check the cupcakes.
Leave to cool. 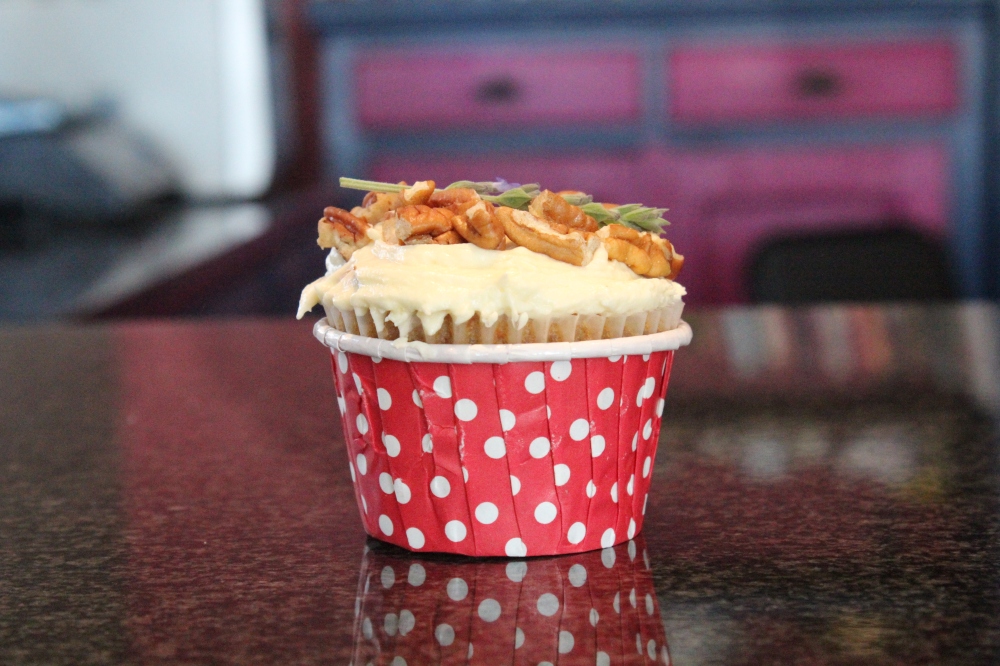 For the frosting:
Cream butter and gradually add the icing sugar until light in colour.
Add the cream cheese and continue beating.
Add vanilla essence.
Continue beating until smooth – do not over-beat as the frosting can split.

To complete:
Spread the frosting over the cool cupcakes, top with pecan nuts and garnish with edible flowers.