It’s always a bit daunting to recreate someone else’s recipes…and for the 3rd episode of Mela, I was taken aback when my lovely producer asked me to re-create the recipes of Michelin Starred Chef, Atul Kocchar.

After reading through his recipe, I realized that we share a similar food philosophy – I keep it simple and so does he…Atul also seems to be a ‘old is gold’ chef….he uses simple techniques and makes use of fresh herbs like curry leaves and coriander….garlic and one of my favourites, coconut milk! I am sure that we both would disagree though on the pro’s of using frozen ‘box fish’ – it’s sometimes difficult to source fantastically fresh fish in Jozi so I use the convenient option….

I don’t enjoy fussy food and must declare, that after cooking up Chef Atul’s Keralan Fish and the Spicy Wilted Spinach, that I am starry eyed….I think I have a food crush on this chef!

I did change the recipes slightly…cutting down on the whole green chillies and also by adding tomatoes to the wilted spinach to suit my personal tastes! If you missed the episode, click on this link…https://yudhikayumyum.com/sabc-2s-mela-videos/mela-ep-3-keralan-fish-and-wilted-spinach/

Just a quick tip…I met with Kaye and Tamsyn from AMC cookware. We discussed pots and pans….and I had to explain what a fish pot was….its a wide AMC pot that is not deep. The fish needs to be poached in the sauce in a single layer to prevent it from becoming an absolute mush!

Here is the recipe…

Here’s how
Gently rub the fish fillets with 5ml turmeric and 5ml salt.
Heat the oil in a 30cm AMC pot, then sauté the onion with the 2,5ml salt until pale golden brown.
Add the chillies, half the curry leaves and garlic – sauté until fragrant.
Add the red chilli powder and remaining turmeric.
Pour in the coconut milk and simmer gently until the sauce begins to bubble.
Place the fish fillets into the sauce and simmer on a low heat setting until the dish is cooked through.
Heat a little sunflower oil in a pan.
Once the oil is hot, fry the remaining curry leaves until they splutter.
Garnish the fish with fresh coriander and fried curry leaves.

The big day has finally arrived! I cannot believe that after months of shooting and flying around South Africa, Mela will be launching tomorrow on SABC2 at 10.30am! I have been celebrating the launch date and the KitchenAid Stand Mixer competition has been keeping me incredibly busy. More about the competition on this link, https://yudhikayumyum.com/competition/kitchenaid-giveaway-2014/ 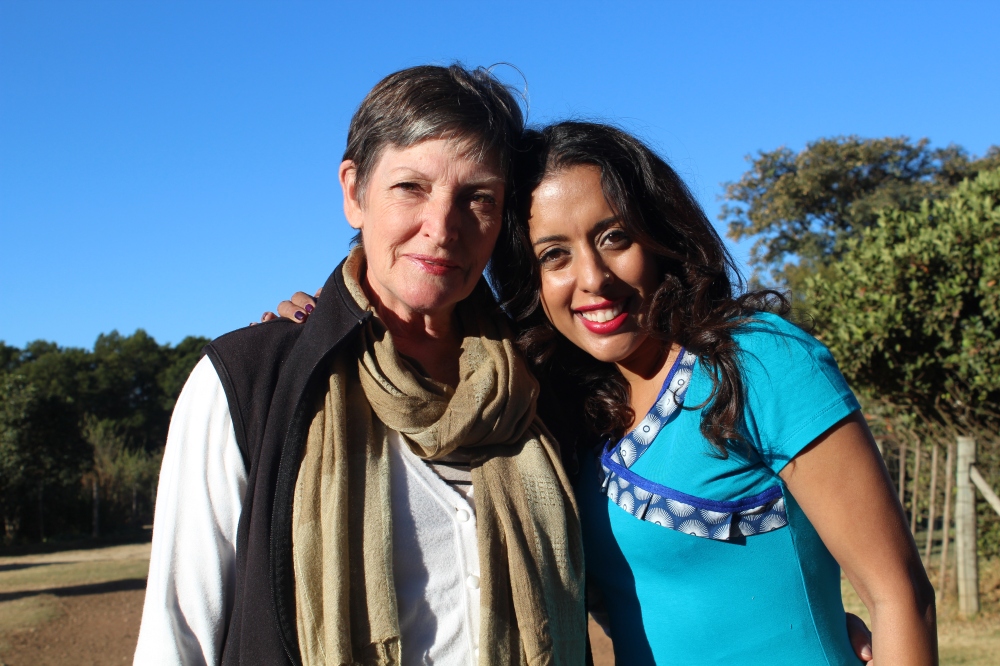 Rina and I at Belnori Boutique Cheesery….

My first episode took the team and I out to Bapsfontein to Belnori Boutique Cheesery and it was a real treat. I was set on making paneer and thought it would be a great idea to try it with goat’s milk. We were met by the owners, Rina and Norman Beicher – this couple is really passionate about goats and cheese, of course! They produce an extensive range of award-winning cheeses. I am an absolute fan of ‘Chevre Frais’ or the soft goats cheese so I didn’t need much coazing to get started on the tasting!

Goats…I do love them! I think I must have fallen in love with these creatures at the Fairview Estate! I absolutely love the curiosity that sparkles in their eyes, their animated silliness, and they are incredibly mischievous!

Rina was an absolute charm and took me through the range of from cottage cheese to semi hard varieties, camembert and even yoghurt! But it was the fresh goats milk that i was after! I have sometimes tasted goats milk and cheese that was pretty unpleasant. Rina explained that the ewes are kept away from the rams and bathed regularly….it all comes down to good animal husbandry, she said! Tasting the products, I realized that she had a point…there weren’t any ‘goaty’ flavours in the yoghurt or cheese! Belnori is a gem!

I picked up a bucket and then hustled back to Holi Cow to prepare a batch of paneer! Cow’s milk can be used instead in this recipe…but if you are feeling adventurous, give the goat’s milk a chance!

A word about paneer…it does take some time to prepare so please do use a good pot for the preparation. I used the AMC paella pan, which is wider at the top. Use a paddle spoon to stir the milk as it heats through to prevent the milk from scorching which gives the paneer a nasty burnt flavour. I also prefer making up a larger batch of paneer so you get thicker, chunkier pieces and it can be kept in the refrigerator for a few days or even frozen until needed.

In the first episode, we got through two recipes…the preparation of the paneer and a double bean curry with creamy paneer! Double beans can sometimes be found in Fruit and Veg City stores and almost always at Indian greengrocer. They are bright, colourful, and delicious.

Here’s how:
Boil the full cream milk in an AMC pot.
Stir the milk to prevent a skin from forming.
Prevent the milk from burning by scraping the bottom of the pan.
Once the milk comes up to the boil, add the vinegar.
The curds will separate from the whey.
If the whey still looks milky, add a little more vinegar.
Do not stir the milk – this will break the curd that will be difficult to work with.
The curd will float to the top and form a thick layer.
Gently scoop the curd into a sieve using a large slotted spoon.
Gently press the curd down with a spoon to remove excess moisture.
Tip the curd into a clean dishtowel and mould into a round.
Wrap the curd tightly and place on a chopping board.
Fill a large pot with water and place this on top of the paneer to press out the whey.
Leave aside until firm.

If the paneer is too soft, unwrap the cheese and leave uncovered in the refrigerator. 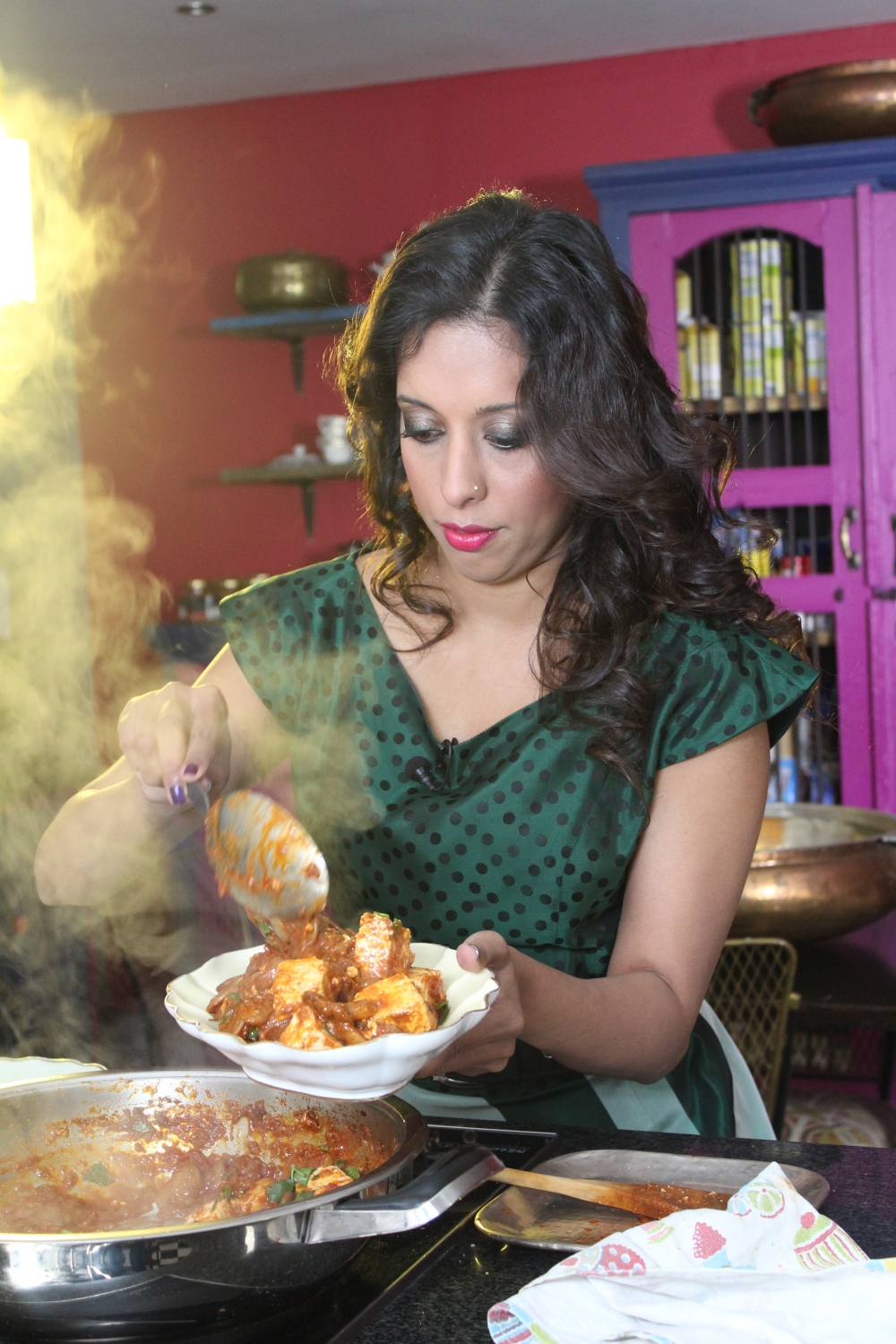 Heat the sunflower oil, then add the mustard seeds and fry until they splutter.
Add the cumin seeds and fry until they turn a shade darker.
Add the onion and sauté until the onion turns light golden brown.
Stir the ginger and garlic paste into the onion, then add the red chilli powder, cumin, coriander and turmeric – stir for 3 – 5 seconds.
Drop the double beans into the pot and stir well to coat.
Cover the beans with boiling water and simmer until they soften.
Add the chopped tomatoes and salt.
Simmer until the sauce thickens slightly.
Cut the paneer into chunks and place them over the cooked beans.
Lower the heat and simmer until the paneer heats through – add a more boiling water if the sauce is too thick.
Garnish with curry leaves and fresh coriander.