Life is beautiful…Life is colourful and now Life is Mela!  You must be wondering what a ‘Mela’ means?  Mela is an Indian fair.  Think bright colours, celebrations, delicious feasts and laughter…most importantly laughter!

A few months ago, I hosted a charity fundraising dinner for Richard Fienberg at Ethos Private Equity, and while preparing the feast, I received a call from the lovely Saira Essa who asked if I would shoot around 10 episodes for her new show.  I had worked with SABC 3’s Eastern Mosaic before but this was a ‘wow’ moment!

I couldn’t believe it….she promised to ring me a few days later and we set up a telephonic appointment…I waited by the phone…paced the garden at Holi Cow killing the lawn and then she rang…dead on time!  It suddenly began to sink in….this was really happening….what was I going to cook, what was I going to wear???

It just seemed too good to be true but the shoot was scheduled and we completed 17 food slots!  It was hard work, long hours and most importantly lots of laughs.  It seems that this is what the Mela team is all about.  I have now officially joined the team with Jailoshni Naidoo, Kajal Bagwandeen, Tevin Naidu, Mishal Mookrey, Farrah Mia, Fadeen Mia, and our very own South African ‘Material Girl’, Zakeeya Patel! 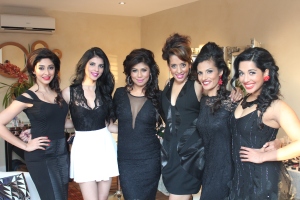 This big moment in my career calls for a celebration and Love begins with like….so ‘follow’ me on Twitter: http://www.twitter.com/YudhikaSujanani and leave a tweet about the competition!

OR log onto www.yudhikayumyum.com and post a comment…share the link, and you could be the winner of one of my kitchen ‘must have’ appliances, A KitchenAid Stand Mixer worth R6990!